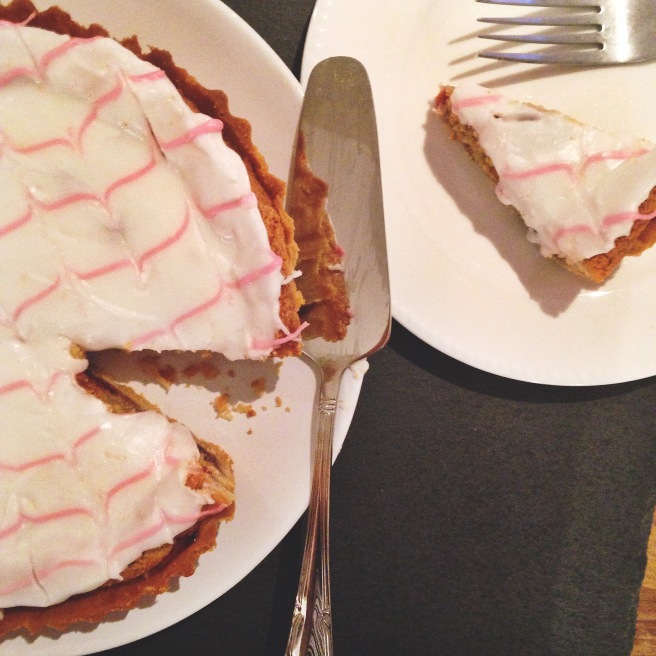 When I think of Bakewell Tarts, I immediately conjure up an image of a Mr Kipling’s Cherry Bakewells. However, the traditional Bakewell Tart is slightly different and in fact, contains no cherries whatsoever. It comes from a pretty little market town called Bakewell in the Peak District which is full of bakeries selling the traditional Tart. I’m not sure you’ll find ones with icing on, but the feathering effect definitely gives an impressive finish. 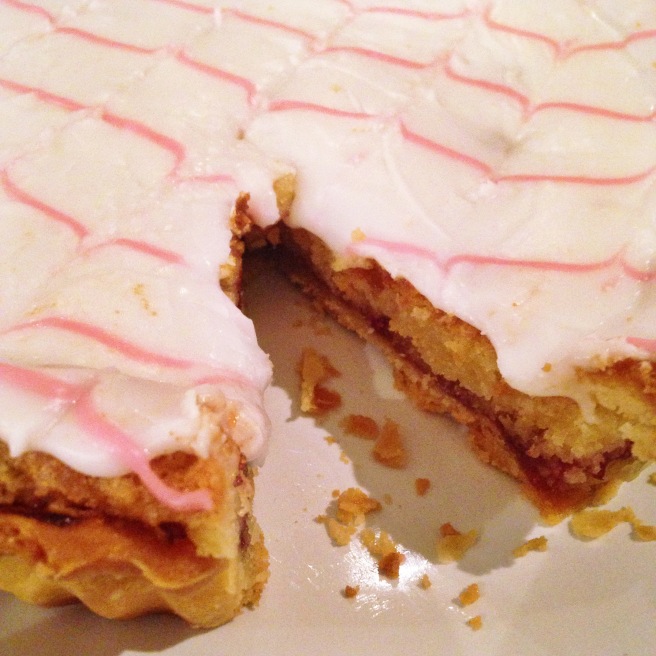 This week I thought I’d revert back to the technical challenge and attempt a Bakewell Tart. This is a tricky one for me as I’ve never made my own pastry (I’m a jus-rol kind of girl), I’ve never made frangipane and icing isn’t my strong point. Recipe for disaster no? Well actually, it turned out surprisingly well – no soggy bottom in sight! But I can see why the contestants struggled as it’s a lot harder to make that it looks. And as the name says, it’s very technical. The trickiest bit for me was getting the frangipane level. I found that it looked fine when I took it out of the oven, but it sunk a little in the middle as it was cooling. Nothing that a little prodding and clever icing couldn’t hide though!

I thought I should stick to Mary’s recipe as I wanted to re-create the bake off style. You can find it here. I’ve also re-written it below where I think I’ve simplified it a little. 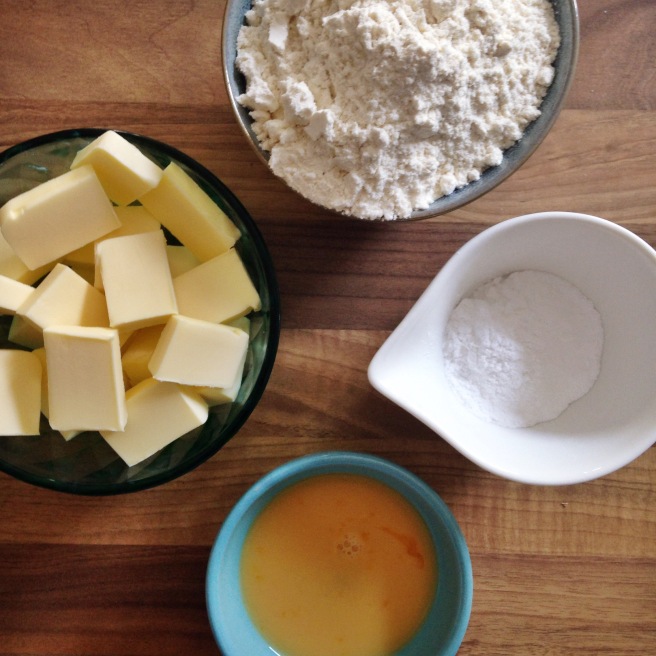 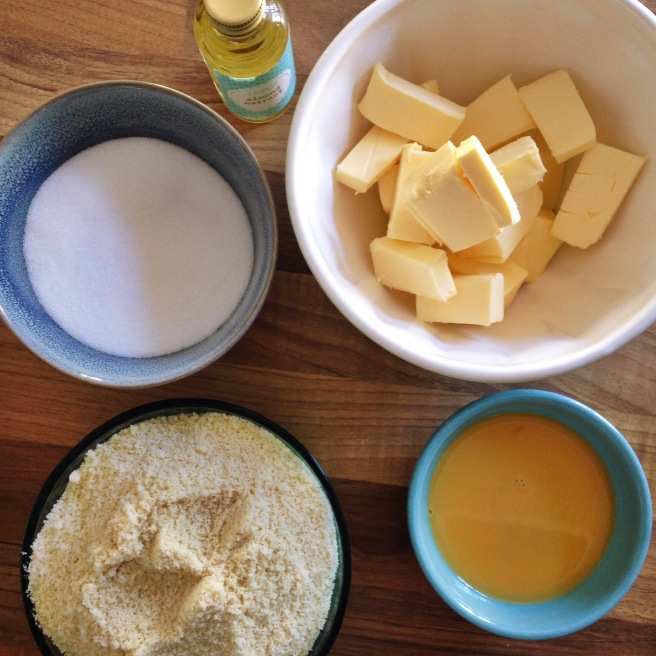 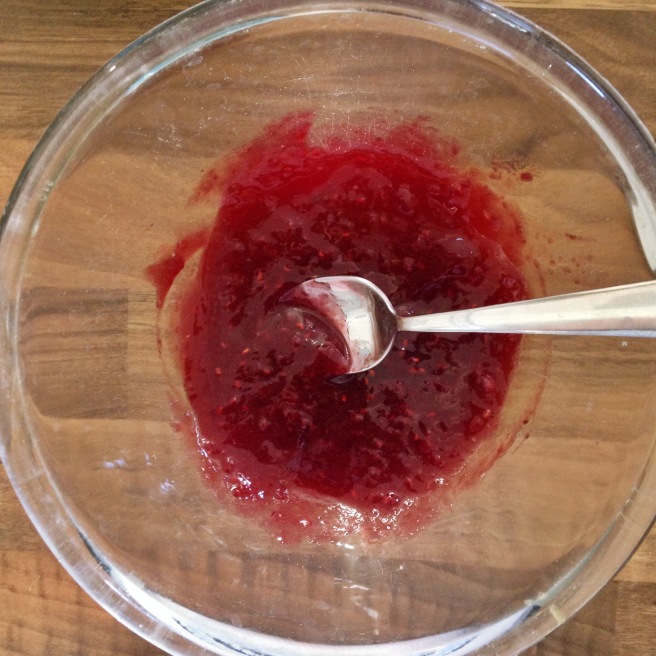 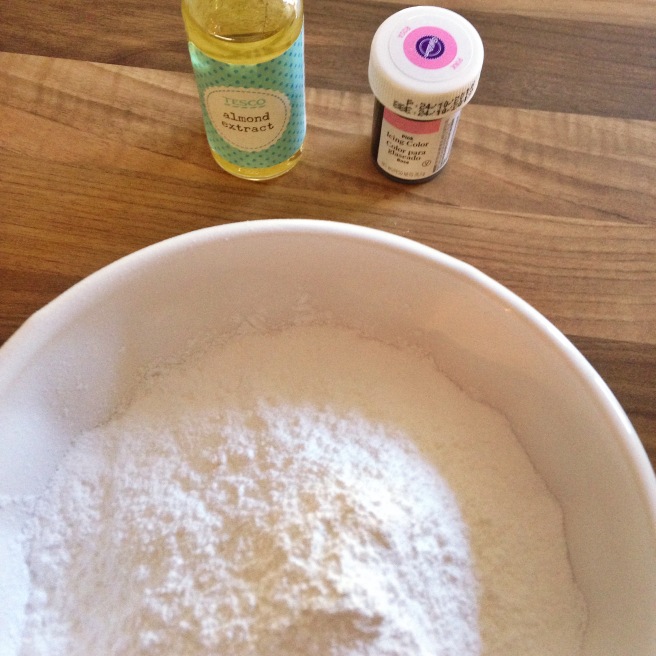 Method
First job is to make the pastry. Put the flour in a large bowl and rub in the chilled butter with your fingertips until it resembles fine breadcrumbs. 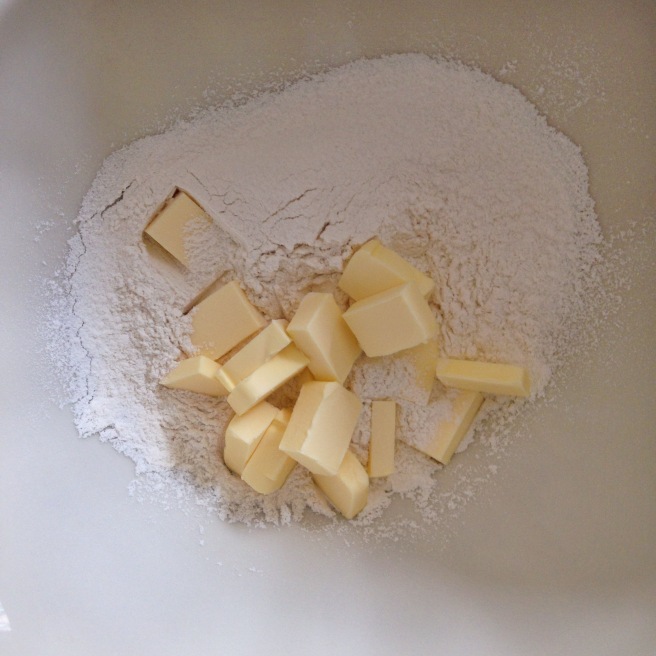 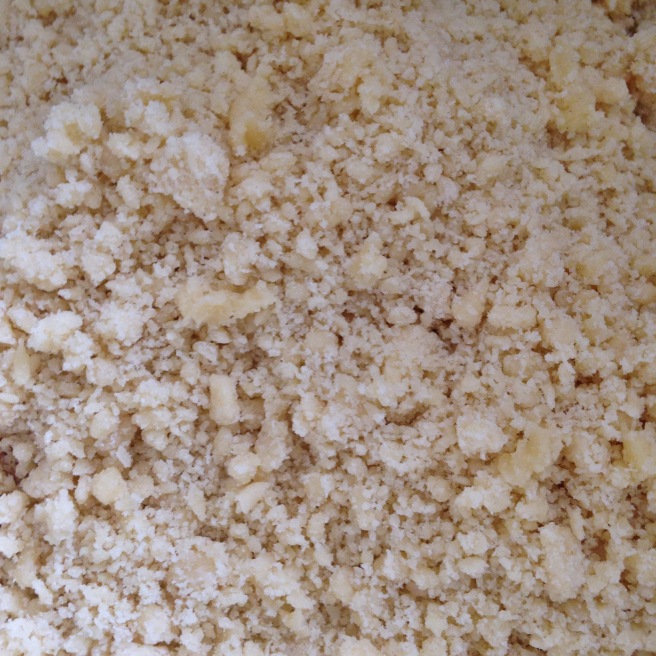 Next stir in the icing sugar, egg and 2 tbsp cold water to make a soft dough. Tip out on to a floured surface. 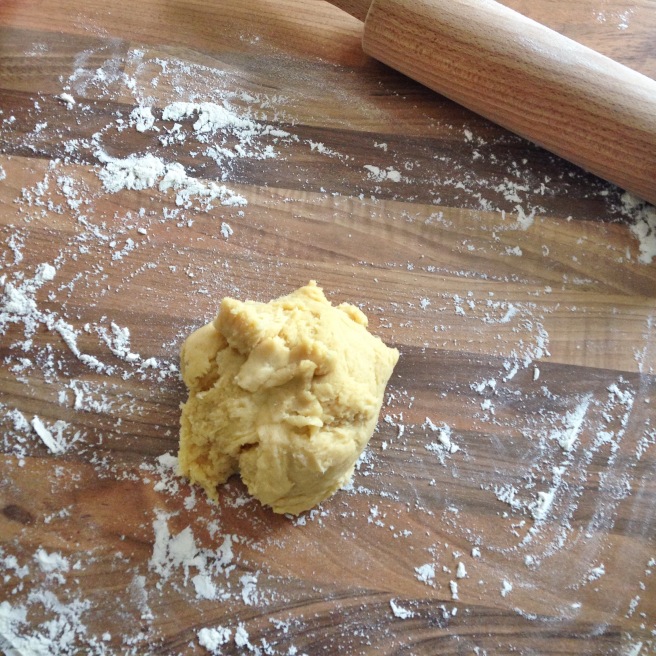 Roll out the dough so that it’s around the thickness of a £1 coin. 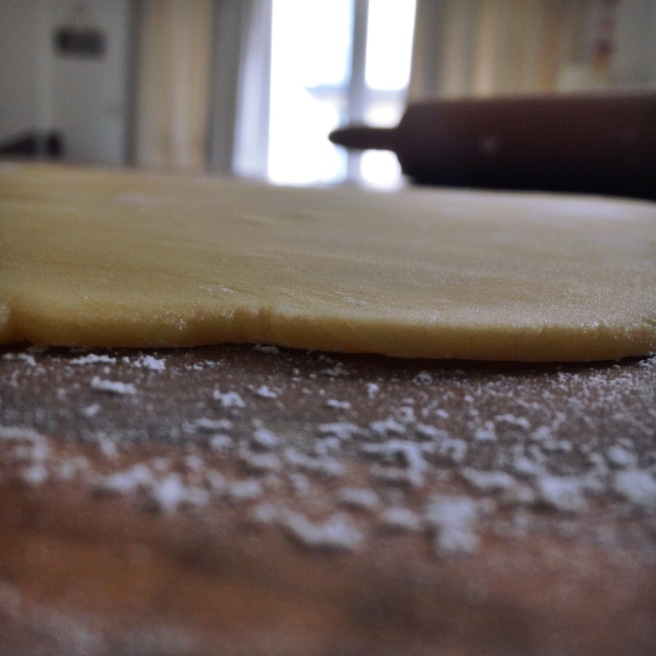 Grease your flan tin and then add the pastry, gently pressing it in to the sides. Then put it in the fridge to chill for 30 minutes. 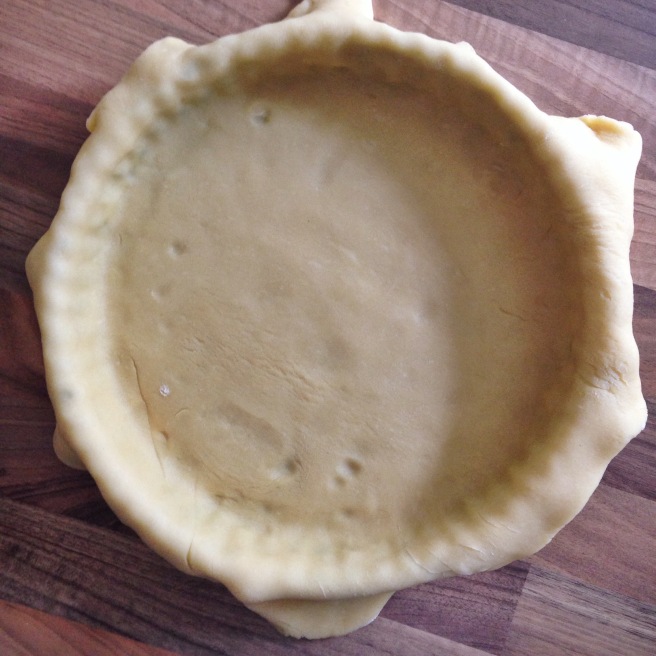 Heat your oven to 200°C/180°C fan. Cover your pastry with non-stick baking paper and fill with baking beans to weigh it down. 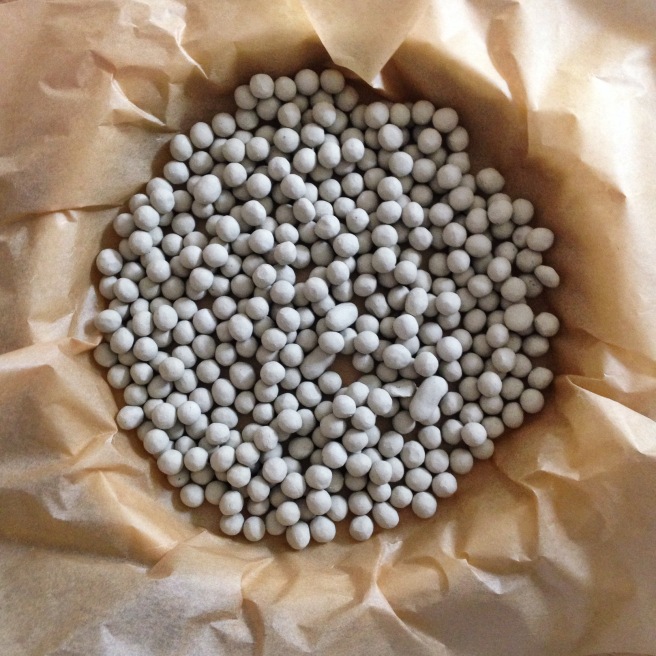 Bake blind for 15 minutes. Remove the beans and paper and cook for a further 5 minutes. Set aside to cool. When cooled you will need to remove any excess pastry. Just cut this off with a knife.

Evenly spread your raspberry jam on to the base of your tart. 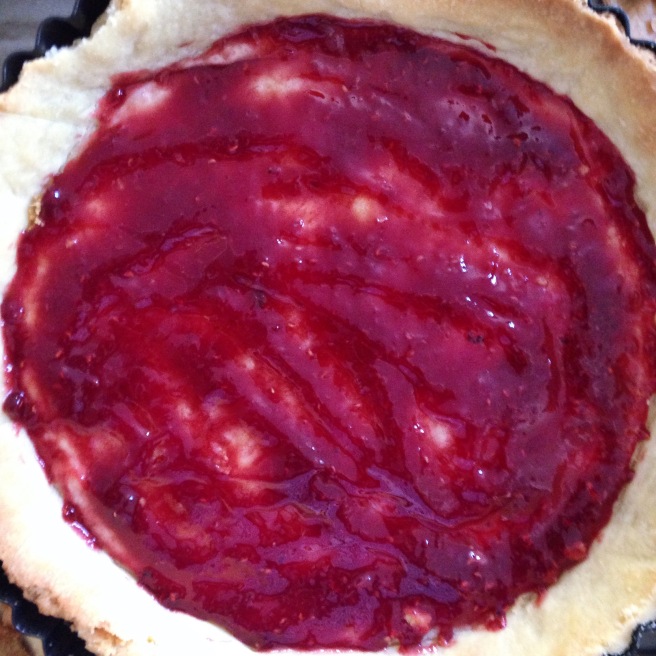 Cream together the butter and sugar until pale and fluffy. Add the ground almonds, egg and almond extract and mix thoroughly. 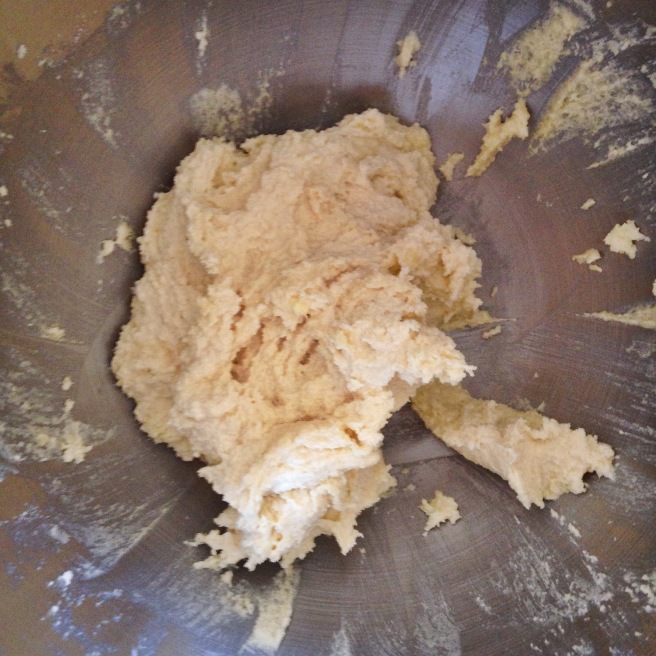 Spoon the mixture on top of your jam and smooth with a palette knife. Be careful not to mix any jam in to your mix. 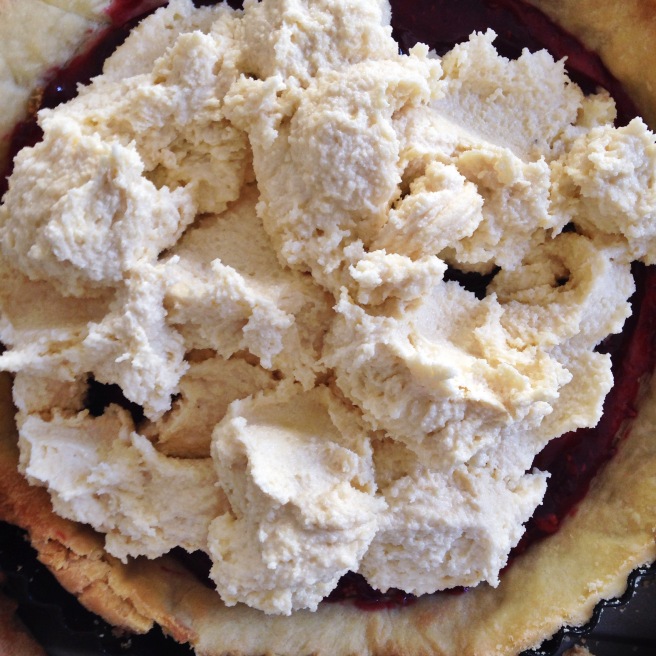 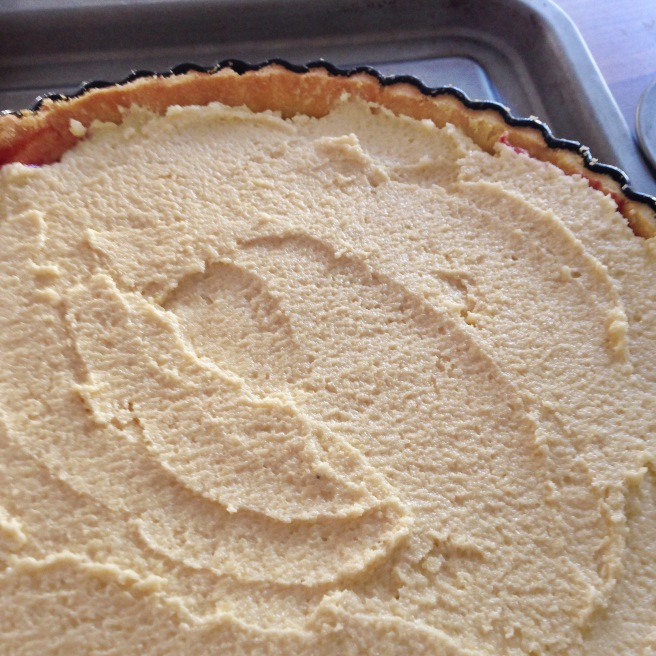 Reduce the oven temperature to 180°C/160°C fan and bake for 25-35 minutes until golden brown and a skewer comes out clean. Remove from the oven and leave to cool in the tin. 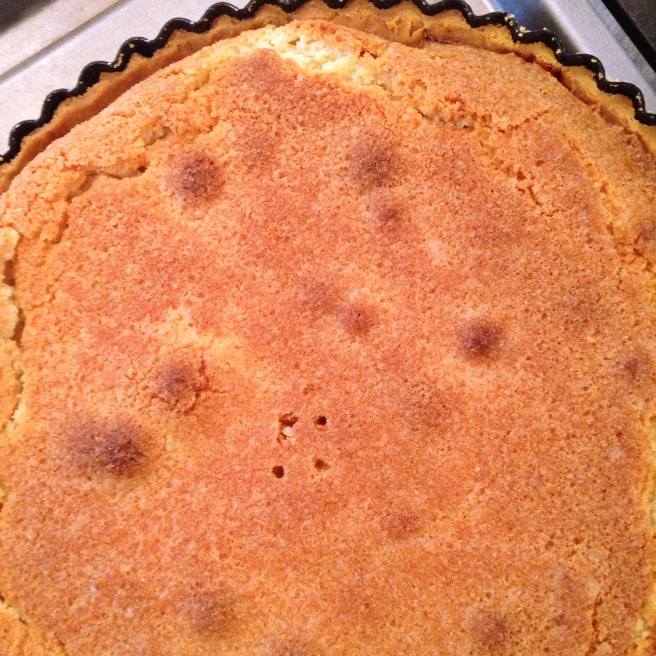 Now on to the icing. Add the icing to a large bowl. Stir in the almond extract and add around 5 tbsp cold water (or enough to make a thick icing). In a smaller, separate bowl, add about 3 tbsp of the icing and mix in the pink food colouring. Spoon your pink icing in to a piping bag. 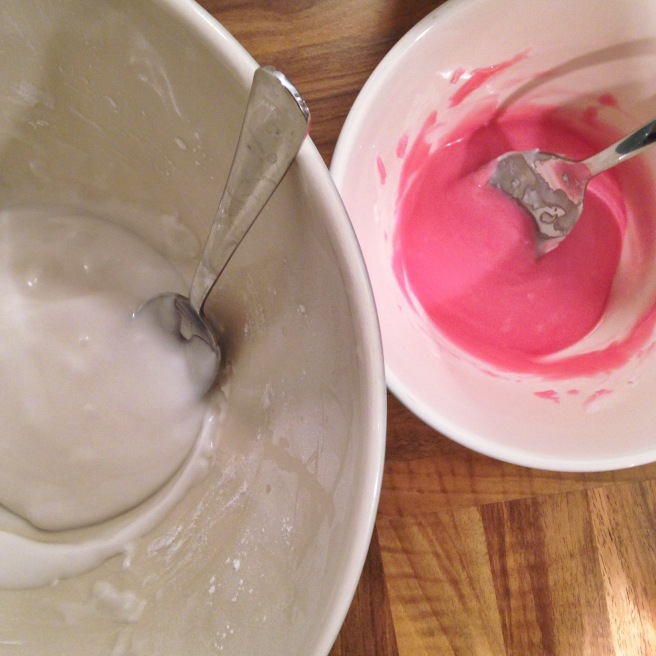 When the tart has cooled, spread your white icing all over the top of the tart. Pipe straight pink lines on the top, about 2cm apart. Then drag a cocktail stick (I used a thin skewer) through the lines in alternate direction to get a feathered effect. Leave to set and serve to all your friends 🙂 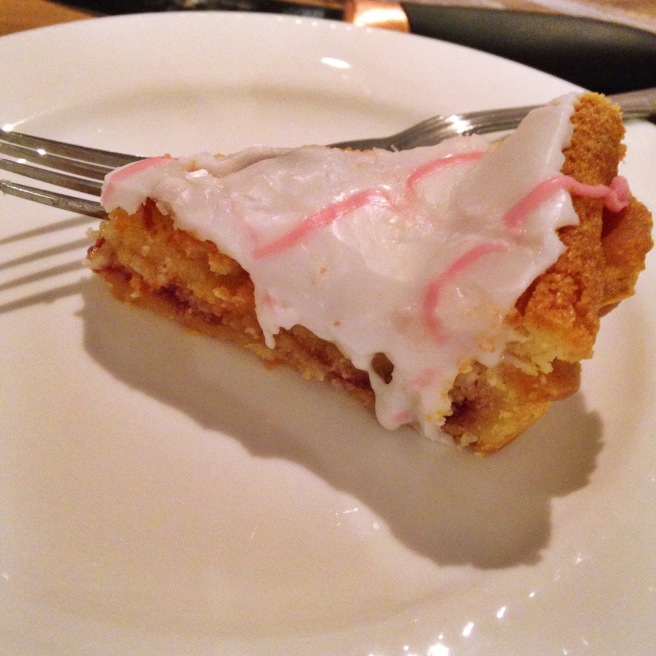 Enjoy – and look out for a Nutella and hazelnut version of this recipe coming soon! X